VOV Batayan (Window of VOV in ENglish) Year 2 Edition 1 has been released. Please follow the link to downoad your copy.

To obtain your copy, just email us from our contact page 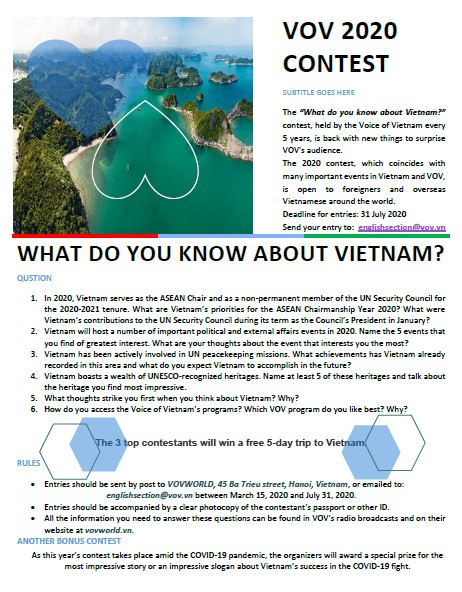 The Voice of Vietnam has launched a song writing contest in the lead up to the 132nd General Assembly of the Inter-parliamentary Union (IPU- 132) in Hanoi on March, 2015.

Professional and amateur musicians or songwriters in Vietnam. (Members of the Organizing Committee and Jury Board are not allowed to participate).

Entries should welcome IPU-132 hosted by Vietnam’s National Assembly; praise and honor peace, security, development, and humane values; promote human rights and friendship among nations, between the National Assembly and people of Vietnam and the parliaments and people of countries around the world; introduce the land, people, and cultural diversity of Vietnam to international friends; and promote Vietnam’s image to the world.

- Songs should have both lyrics and music and be clearly presented, (handwritten or typed, no erasing) on A4-sized paper.

- Clearly state the names of the authors of the music and lyrics. (A CD of the recorded song is encouraged).

- Songs must have no copyright problems.

- Each entrant or group of entrants may send no more than 03 entries.

The awards ceremony will be held in early March, 2015.